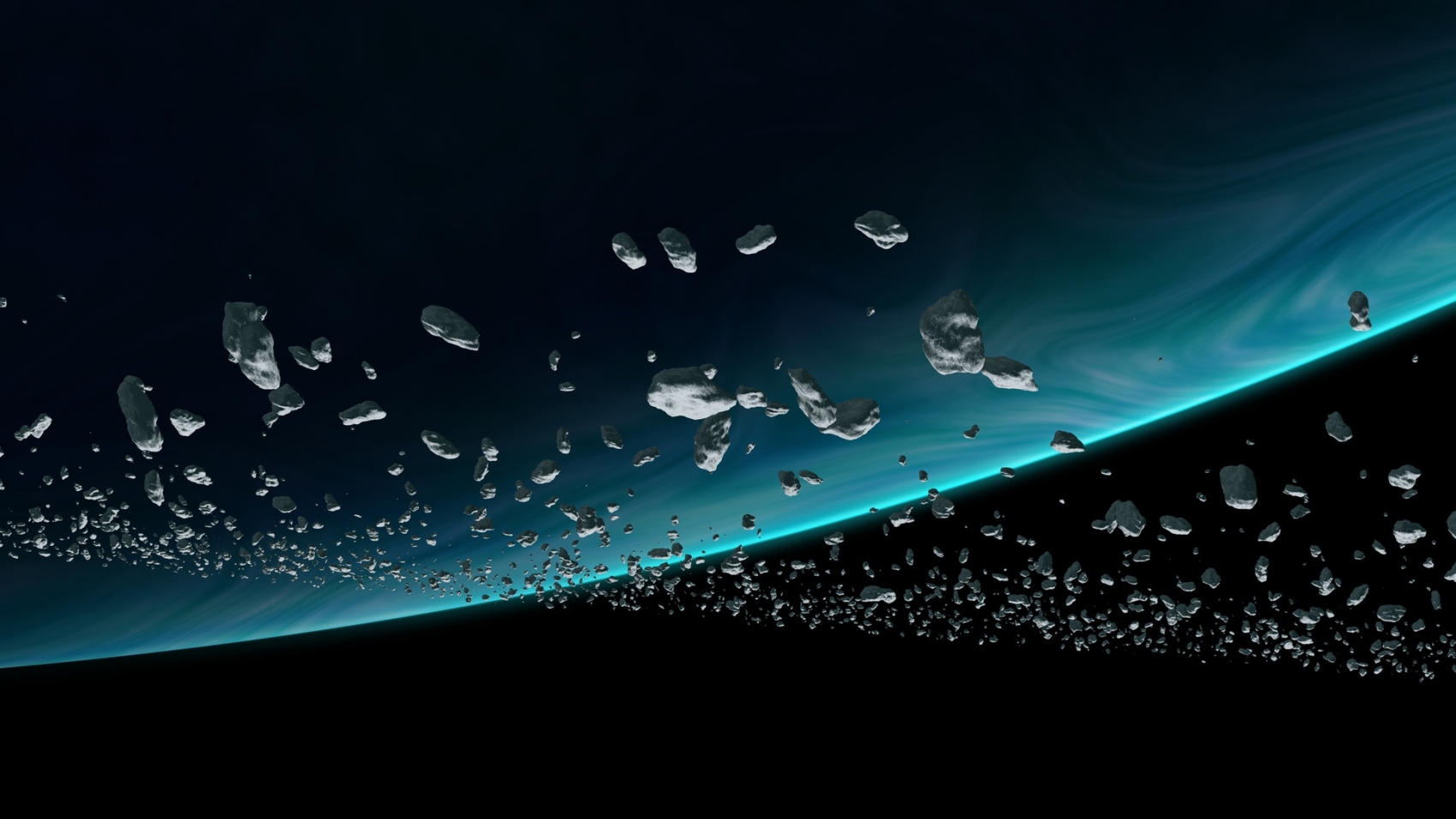 The over-exploitation of the Earth’s Mining Resources is already leading some people to bypass; even refute and deny; the consequences of these attitudes and choices, by proclaiming an appropriation, for their own private interests, of the Natural Resources of the Solar System, namely the so-called Minerals Asteroids. Especially those with ultra rare minerals. Technically speaking, various initiatives or projects have been initiated. But the form and content are the same. The form is to bring back to Earth the ores, refined or not, of Asteroids to sell them to the highest bidder. The bottom line is to appropriate resources on a first-come, first-served basis. And after me the flood [Asteroids or not!]

But these asteroids are not objects that would have been made by those who claim to monopolize them for their own profits [As if the fact that a fox enters a hen-house, before the farmer, gives him the right to kill all the hens, without even eating them]. We must repeat this fact and create/improve the rule of law necessary to ensure that these asteroids belong to everyone, to all humanity and to future generations.

These collective goods therefore constitute a full-fledged Universal COOPERACTIVE ASSET. The profits of their operations must go to each person of Humanity, distributed, this time, in a completely equal way. Each human being receiving as much, no more, no less, than any other human being.

Proposals for a PRACTICAL organization of this COOPERACTIVE ASSET.

Let us create a structure dedicated to the exploitation of these Asteroids which we will attach to a meta Structure which we will call OCCC: Central Commons Coordination Office, which we will colloquially call “O3C”[Let us also specify that we will refrain from adding the word Fundamental to the name of the Office for problems of acronym sound]. The operating principles will be as follows:
– Consultation of several Cross-Expertise studies to determine the safety standards for the exploitation of these Asteroids. In addition to the problems on Astronauts exploiting Asteroids (accidents on members ranging from the blow of a hammer on the fingers to the crushed leg, suit tears, air leakage in ships or space station, etc.) it will be necessary to take into consideration especially the safety on the transfer of the Asteroid or its contents to the Earth. It would be very inconvenient[My little one must tell me that complaints, perhaps even legitimate ones, are probably to be expected] to have an asteroid fall on a city or even simply in an Ocean. The consultation of these expert reports (based on a call for tenders at the highest bidder’s discretion) will be used to establish STANDARDS. Standards that can evolve over time and be enriched by real operating experiences.
These Security Standards will also be used to determine, in a minimum manner, the number and qualification of personnel necessary for the proper use of the Resources. Without going into too much detail, this is where we can describe the necessary training for these personnel, working conditions (duration, frequency, rest), capacity tests, possible reclassification, and so on.

– Consultation of several Cross-Expertise studies to determine the number of possible sales in certain areas, precisely and spatially delimited by authorizations in good and due form over limited periods, asteroids can be collected and exploited. To use historical references, we will talk about Operating Permits and Concessionaires.

– Call for tenders: On the basis of these different expertise, then their updates in Knowledge Models, international calls for tenders will be launched. The call for tenders will include the minimums described in these expert reports and the quotas for the distribution of Asteroid sales. The distribution pattern is as follows:
– First of all, definition of a minimum cost of the Operating License, non-refundable and payable in advance. The concessionaire undertakes to give the Community 20% of the sum specified in the studies at its financial risk and peril. Whether it leads to a low profit, a small deficit or a total loss of investments. This is not the Community’s problem.
– A degressive grid of concession costs. On the basis of the performance appraisals provided for in the appraisals, a performance grid specific to each concession will be established. But this grid will always be the same decreasing progression for all Permits. Only the quantities, the thresholds of each percentage interval will be different depending on the size of the permit. In any case, the 50% benefit threshold for O3C (because it must be understood that Asteroids are minerals belonging, at least to all human beings and therefore their exploitation must first go to the inhabitants of the Earth,) will be the minimum threshold. The grid can be of this type:
First 25% of asteroids collected (reduced to the mass expected to be collected. Otherwise, due to the increasing scale of yield offered to private companies,
the 25% of Asteroids collected first would be the smallest to keep in the last slice, the most profitable, the largest Asteroids):

Obviously, the proposed thresholds are only proposals to launch the debates and exchanges. The key is to understand the spirit of the mechanism and to preserve shared benefits for all inhabitants of the Earth.
If some people think that the distribution proposed, a maximum of 50% for the Private sector is not motivating enough and incentive, let us simply recall 2 certainties.
a) Private companies did not create the Asteroids.
b) The asteroids’ operating profits will be so Huge and Enormous! Only one small asteroid could be worth billions of Euros or Dollars.
– Beyond the maximum provided for in the expert reports, the threshold of 50% of the benefits will be granted to operators (The nature of the allocations between
the various employees (Minors and Space Engineers) of the
Concessions and investors, will be one of the criteria of the call for tenders
in order to promote the most equitable initiatives).

How to properly calibrate expertise on potential benefits and returns?
By proceeding with methods, i.e., by experimentation, by small batches and by sampling on very small areas in
quantity of Asteroids at the start. Once a Knowledge Model is a slightly more coarsely drawn, more calls for tenders for farms could be launched.

KM of O3C. With Funding.

The KM (Knowledge Model) of Asteroids is composed of several elements. It will initially consist of Multi Expertizes
to determine Safety Standards, both at the level of the minimum quality of equipment than the minimum number of staff and his training. The number of minimum wages for “workers will be to be determined. The incentives and a number of the Premiums are proposed as a minimum identical for each Activity Theme (piloting, recovery …)

Apart from a minimum guarantee corresponding to the Minimum Wages in effect in the Developed Countries, compensation, and any bonuses, will only be paid to employees only after the production sales and the Receipts by other companies of the Minerals. (And this not to avoid having actors paid to do nothing or claiming to be active).
On the other hand, the employees’ payments, after the sale of the minerals, are guaranteed by the O3C which is itself insured by an insurance Pool to have the necessary payments if necessary.

And as the warnings for alcoholic beverages indicate, asteroids should be collected in moderation! This is for three main reasons identified at the time of writing. And for different reasons I will mention only one of these three.

What are the precise percentages, weighting, penalties to be applied in calls for tenders? For the moment, the author has no idea :-). And that doesn’t matter. This will be analyzed and studied by other individuals and teams before the first Concession call for tenders. Because it is more important to decide first on the substance, the spirit of having a concession for the benefits of each human being on Earth. And to adapt afterwards to the possible forms when the time for action has come. Forms (technical, social) that will evolve between the time of writing the article and the first exploitations.

Sources of Information and Reflections.
– Mining of Minerals on Earth in 2019. (In French)